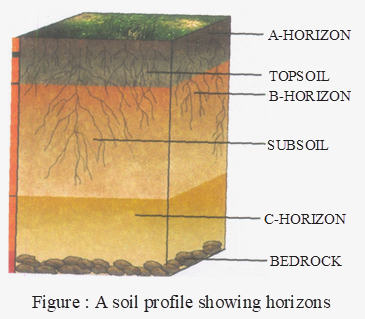 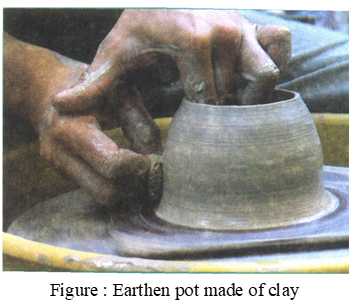 As animals do not have chlorophyll, they can’t prepare their food own. They obtain their food directly or indirectly from plants. Animals may be herbivores, carnivores or omnivores.

In this type of nutrition, animals take in solid food such as fruits, vegetable & meat, etc.

Five steps in the process of holozoic nutrition in animals. are –

Nutrition in Amoeba : Amoeba is a unicellular animal. It eats microscopic plants & animals that float in water.

The complete process of nutrition in amoeba is as follows –

Digestion : The food is digested in the food vacuole by digestive enzymes.

Egestion : When a sufficient amount of undigested food collects inside amoeba, then its cell membrane suddenly ruptures at any place & the undigested food is thrown of the cell. 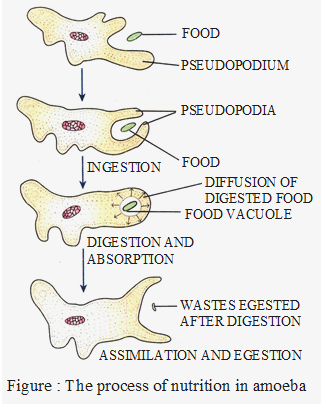 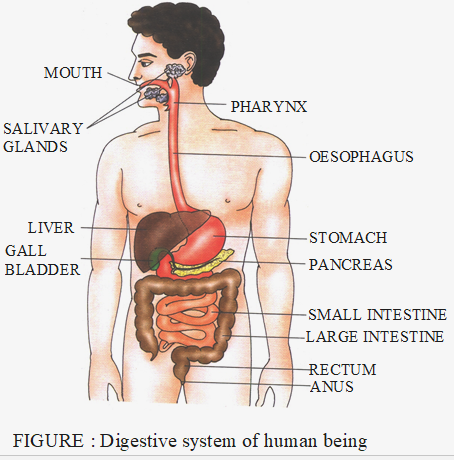 Teeth : Teeth are hard structures held in sockets of the jaws. Teeth cut, chew and break food into smaller pieces.

Tongue : Tongue is the organ used for taste. It contains taste buds to distinguish whether a type of food is sweet, sour, bitter or hot (figure). It also helps in rolling and pushing the food into the pharynx. It mixes the saliva with the food and also helps us in speaking. 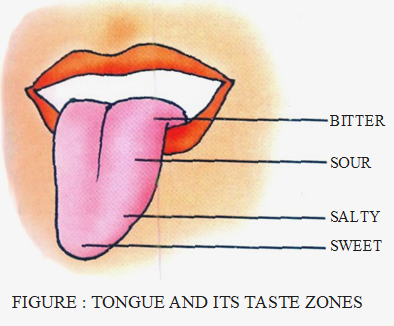 Oesophagus or Food Pipes : It is a connecting tube between the mouth and stomach. The food is pushed down towards the stomach by the movement of the muscles of the food pipe. 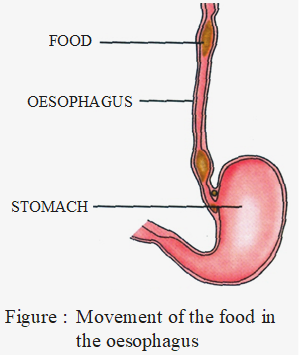 Small Intestine : It is a coiled tube and is about 7 metres in length. It consists of three parts, namely dueodenum, jejunum and ileum. In the small intestine the food is mixed with bile juice and pancreatic juice. These are secreted by the liver and the pancreas, respectively. Bile juice breaks down fats into fatty acids and glycerol. The pancreatic juice breaks down starch into simple sugar and proteins into amino acids. Digestion of all the components of food gets completed here and the end products are ready for absorption.

Absorption of food occurs through millions of small projections in the inner walls of the part of small intestine called ileum. These projections are known as villi. The incorporation of absorbed nutrients into the cell components is called assimilation.

The food that remains undigested and unabsorbed then enters the large intestine.

Large intestine : It is the last organ of the digestive system. It is about 1.5 m in length. It consists of three parts, namely caecum, colon and rectum. It helps in absorbing water and in removing undigested solid wastes from the body in the form of faeces through an opening called anus.

Anus : It is the last part of the alimentary canal. Its main function is to expel solid faceces out of the body.

Nutrition in a ruminant

A ruminant is an herbivours animal which regurgitates its food & digest it in step. For example- Cow, goats, sheep etc.

The 2 steps involved in digestion of ruminants are –

Ruminants have a special stomach with 4 chambers, which are as follows –

Digestion of food in ruminants

The ruminants mostly eat grasses and leaves which are rich in cellulose, The ruminants can digest cellulose becuase celluose-digesting bacteria and protozoa are present in their stomach. 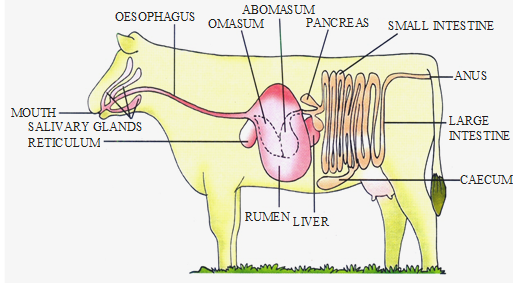 Half-chewed grass travels from the mouth to the first chamber of the stomach called rumen where it is acted upon by bacteria and microorganism. It then goes into the reticulum from where it is returned to the mouth as cud for through chewing called rumination. It enters a third chamber called omasum. Here it is broken down into still smaller pieces. Finally, it enters the fourth chmaber called abomasum where enzymes act upon it and digestion is completed. It is finally sent to the small intestine where the absorption of the nutrients takes place.

Exercise Based on Nutrition in Animals

1. Digestion within a digestive tract is –

(C) the same as absorption

2. Which of the following regioins of the alimentary canal of man does not secrete a digestive enzyme ?

3. A digestive enzyme, salivary amylase, in the saliva begin digestion of –

4. If you chew on a piece of bread long enough, it will begin to taste sweet because –

(A) maltase is breaking down maltose

(B) lipases are forming fatty acids

(C) amylase is breaking down starches to disaccharides

(A) proteins in stomach

(B) carbohydrates in duodenum

(B) to facilitate absorption

8. If the stomach did not produce any hydrochloric acid, which enzyme will not function ?

9. Chief function of bile is –

(A) to digest fat by enzymatic action

(B) to emulsify fat for digestion

(D) to regulate process of digestion

(A) First part of the small intestine

(B) Middle part of the small intestine

(D) Not a part of the small intestine

13. Which of the following organs produces bile ?

14. Which of the following is not a part of nutrition-

15. Which of the organs produces bile ?

17. The walls of the large intestine absorb –

18. Small intestine have this to increase the surface area for absorption –

20. Number of chambers in the stomach of ruminats is –

21. The part of digestive system which helps in mixing food with saliva is –

Fill in the Blank