Reproduction is a process by which every living organism produce an organism like their own.

Asexual reproduction: In this type of reproduction only one parent organism either mother or father produces a new organism.

Sexual reproduction: In this type of reproduction both parent are involved & produces new organisms.

Asexual reproduction in a unicellular organism

Binary fission: During this process, two daughter organisms of equal sizes are formed from one parent by the division of the parent body. This is the most common method of reproduction in algae, fungi, and bacteria (fig.). 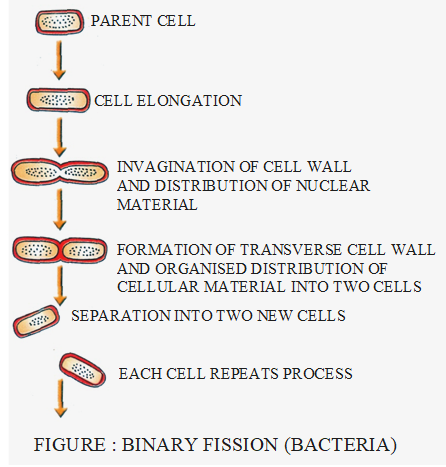 Budding: In this type of reproduction, a small outgrowth appears on the body of the organism. This outgrowth is called a bud. The buds grow and finally detach from the parent body and begin to live as independent organisms. 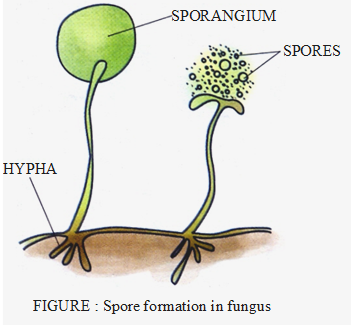 Fragmentation: This takes place in algae like spirogyra and oscillatory. The filament of the alga breaks into two or more pieces called fragments, and the process is known as fragmentation. Each fragment grows into a new plant. 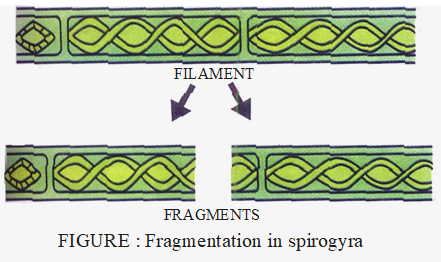 Natural propagation by leaf: Vegetative propagation by leaves can be seen in very few plants like bryophyllum and begonia. In these plants, buds are produced on leaf margins. These buds after falling on the ground grow into new plants.

Natural propagation by the stem: Underground stems are modified for the storage of food. ?These underground stems produce several new plants from their buds. Modified stems like tuber, bulb, rhizome, and corm help the plants to multiply.

Natural propagation by root: Roots also help in vegetative propagation. For example, sweet potato and dahlia give rise to new plants from their fleshy roots. (figure)

Grafting: In this commonly practiced method a new variety is obtained from the mother plant (figure). In this process, a detached part of one plant is inserted into the stem or the root system of another plant. 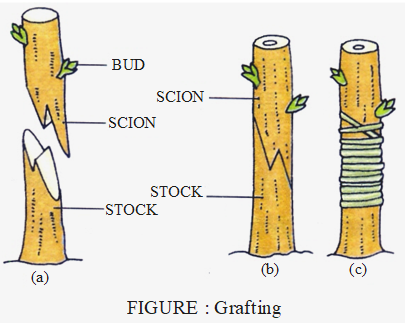 The short piece of detached shoot containing several buds is called the scion. The lower portion of the plant that is fixed to the soil by its roots system is called the stock. They establish a vascular connection with each other after a few days.

Layering: In this method, a young branch is bent towards the ground and covered with moist soil. After some days, new roots develop from the covered part, which is in contact with the soil. This is called a layer and the process is called layering. The branch is then separated from the parent plant and allowed to grow into a new independent plant. 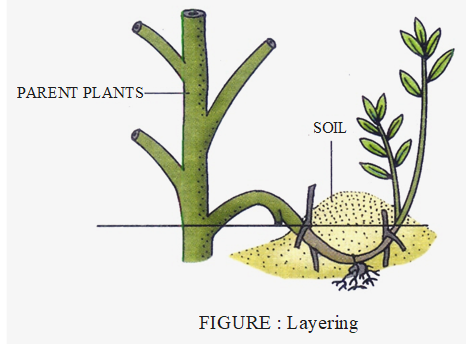 Cutting: In this method, a healthy young branch of a plant having leaf buds is cut out and planted in moist soil (figure). The branch develops roots and grows into a new plant. Bougainvillea, sugarcane, rose and grapes are grown from cuttings.

The androecium is the male reproductive part of the flower. Androecium may consist of one or more tube-like stamens. Each stamen consists of a thin stalk called filament and a two-lobed head called the anther. The anther contains pollen grains which produce male gametes.

The pistil or gynoecium is the female reproductive part of the flower. Each pistil consists of stigma, style, and ovary. The ovary contains one or more ovules.

Pollination is the process by which pollen grains from the anther of a flower are transferred to the stigma of the same flower or another flower. 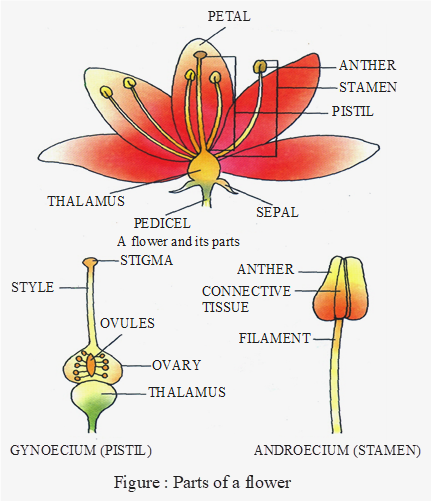 There are two types of pollination which are described below : 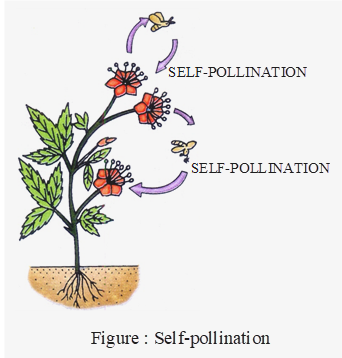 It is the process of transfer of pollen from the anther of a flower to the stigma of a flower of another plant of the same species or sometimes of very closely related species.

After successful pollination, the stigma secretes nutrients for the lodged pollen grains. The pollen grains absorb these nutrients and grow to form a thin tube called a pollen tube. This grows into the stigma in down the style (figure). It grows until it reaches the ovule and enters inside it. The pollen tube contains two male gametes. After reaching the ovule, it releases the male gametes, one of which fused with the egg to form the zygote. This process of fusion of a male gamete with a female gamete is called fertilization. The zygote develops into an embryo. 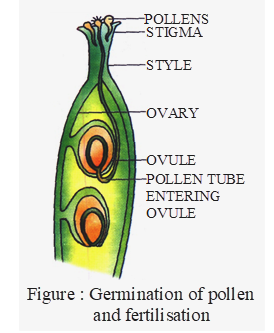 After fertilization, the ovary grows into a fruit and the ovules inside it become seeds. The other parts of the flower such as sepals, petals, and stamens fall off. The fruit is actually a biologically ripened ovary.

How is bryophyllum plant propagated?

Which method is used to propagate the begonia plant?

What is the mode of reproduction in spirogyra?

What is the name of the male and female parts of a flower?

What is a zygote and how is it formed?

What is tissue culture?

What is the significance of the dispersal of seeds and fruits?

What is the function of pollens in flowering plants?

Why are artificial vegetative reproductive methods so commonly used nowadays?

What is the main difference between asexual and sexual reproduction?

How is fertilization brought about in a flower?

What do you understand by fertilization? Explain it with a neat and well-labeled diagram.

Respiration in Plants and Animals