National Sports Day is celebrated every year in India on August 29 on Dhyanchand’s birthday. National Sports Awards are also distributed on this day. Let’s know how many sports awards are there 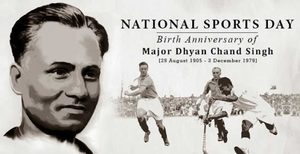 How many sports awards are held in India

Government of India Announce Total 4 Awards every year. 3 awards which is given to sports athletes and 1 award goes to mentors. Given in Sports Athlete and Men

According to the Sports Ministry website, the Rajiv Gandhi Khel Ratna Award is India’s highest sports award. The award is named after former Prime Minister of India, Rajiv Gandhi. It is given to the best player of India every year, although the award player is selected on the basis of several criteria. The player who wins this award can be from any field.

Arjuna Award is the second highest award after Rajiv Gandhi Khel Ratna. It is also given on the basis of the past four years’ performance of the players. The Arjuna Award was instituted in 1961. So far 719 players have been awarded this award. In this, the player gets a small statue, certificate and a cash prize of five lakh rupees.

As the name suggests, this award is given not to the player but to his coach. Sports coaches who prepare medal winners are honored with this award. The award was instituted in 1985. A total of 107 Gurus have received this award so far. In this, the coach gets a small statue, certificate and a cash prize of five lakh rupees.

Those who have supported whole life for the development of the game are honored with this award. The award was instituted in 2002. A total of 56 people have received this honor so far. It also has a small statue, certificate and a cash prize of five lakh rupees.

On National Sports Day that was 29 August, 2020, the awardees were received their awards from the President Ram Nath Kovind at a specially organized function from Rashtrapati Bhawan through virtual mode. Let us tell you the day also coincides with the birthday of legendary hockey Olympian, Major Dhyan Chand.

How to prepare for UPSC