Crop: The plants which are grown by man in large numbers to get useful products are known as crops.

Agriculture: The process of growing crops on a large scale is called agriculture.

Horticulture: It is the process of growing fruits, vegetables & ornamental plants.

In India, there are two main crop seasons for cultivating crops. These are known as rabi seasons and Kharif season.

Rabi Crops: These crops are sown at the beginning of winter i.e. between October and November and harvested by March or April. These crops do not depend on monsoon rains.

Kharif Crops: These crops are sown at the beginning of the monsoon seasons between June and July, and harvested by September or October. These crops depend on monsoon rains for growth.

The tools which are used in the cultivation of plant are known as agricultural implements.

All the activities which are involved in the cultivation of crops, from sowing to harvesting, are known as agricultural practices.

This is the first essential stage for cultivating any crop plant. Preparation of soil involves the following step – plowing and digging, leveling, and manuring.

Ploughing and Digging: The process of loosening and turning up the soil is called tilling or ploughing. This is done by using a wooden or iron plough.

Leveling: Soil, if ploughed in the dry season, breaks into big mud pieces called crumbs. It is necessary to break these crumbs with the help of a wooden plank or iron leveler. The field is leveled for sowing as well as for irrigation.

Manuring: Mixing soil with manure is called manuring. manure is usually added to the soil both before and after tilling. Adding manure before tilling helps in the proper mixing of manure with the soil.

The process of putting seeds into the soil is called sowing.

Seeds are sown in the field by any of the three methods described below.

Broadcasting: Seeds are sown manually by directly scattering them into the soil. This process is called broadcasting.

Seed Drills: The other method is to use a seed drill. A simple seed drill consists of an iron tube with a funnel at the top attached to the plough. 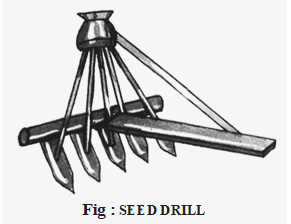 Transplantation: There are certain crops like paddy and some vegetables for which seeds are not directly sown in the field and then the seedlings are transferred to the main field. This process is known as transplantation.

Crops absorb various nutrients from the soil through their roots. They are required for their growth and development. The replenishment is done by adding manures and fertilizers to the soil. This process is called manuring.

Manures: Manures are natural, organic substances obtained by the decomposition of animal wastes and plant residues. They supply essential nutrients and humus to the soil and make it fertile. Manures are of three kinds:

Compost: It is the manure obtained by the decomposition of dead plants and animal wastes, sewage waste, etc. It is made by burying all available organic material in a pit with alternative layers of soil and leaving it to rot.

Green Manure: Green manure is formed by the decomposition of fast-growing leguminous plants like guar and sun hemp. These plants are grown and ploughed back into the soil.

Fertilizers: A fertilizer is a man-made inorganic compound that supplies specific nutrients to the soil. The most commonly used fertilizers are the NPK fertilizers which are rich in nitrogen, phosphorus, and potassium. Chemical fertilizers have become popular with farmers because most of them are soluble in water and can be easily absorbed by plants. They are also easy to store and handle.

Fertilizers are applied either by broadcasting in the field or by spraying or through irrigation channels. Some examples of commonly used fertilizers are urea, ammonium sulphate, superphosphate, and potassium nitrate.

Difference Between Manure and Fertilizer

The table gives the differences between manures and fertilizers

Natural methods of Replenishing the Soil with Nutrients

Leaving the Field Fallow: It is the process of leaving the field uncultivated (fallow) for one or more seasons. Fallow land will regenerate the lost nutrients. However, due to the high demand of foodgrains, this method is no longer followed.

Crop Rotation: It is the method of growing different crops alternately on the same land. Earlier, farmers in northern India used to grow legumes as fodder in one season and wheat in the next season. This practice was helpful in the replenishment of the soil with nitrogen. Farmers should be encouraged to adopt this practice.

Multiple Cropping: Sometimes two or more crops are grown together in the same field. This practice is called mixed cropping or multiple cropping. The crops are chosen in such a way that the products and waste materials from one crop help in the growth of the other. Cotton and groundnut crops are often grown together for this reason.

However, these methods alone are not enough to maintain soil fertility and farmers have to add manures and fertilizers from time to time.

Plants need water for proper growth and development. Seeds need water for germination. Plants need water to draw nutrients from the soil and for making food by photosynthesis. Water helps the plant to translocate food from one part to other parts of the body. It also protects the crop from frost and extremely hot air currents. Thus water plays an important role in the life of plants right from the germination stage to the maturity stage.

Sources of Irrigation: The main sources of irrigation in our country are rivers, lakes, ponds, wells, tube-wells, dams, and canals. Water from these sources is delivered by irrigation canals or pumped by using electric or diesel pumps.

In our country, traditional systems of irrigation like the pulley system (moat), chain pump, lever system (rahat) and dhekli have been in use for centuries to lift water from water reservoirs and supply it to the field for irrigation. These methods are cheaper but less efficient. 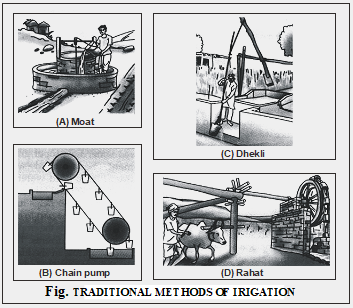 There are four modern methods of irrigation commonly used in India: –

Disadvantages of Excessive or Untimely Irrigation

Weeds are the unwanted plants that grow along with the main crops. They are undesirable because they compete with the main crop for nutrients, space, air, light, and water, etc., and reduce the crop yield. They also spread pests onto the crops and sometimes produce poisonous substances that are harmful to animals and humans.

The process of removing weeds from the field is called weeding.

Best Time for weeding: The best time for the removal of weeds is before they produce flowers and seeds.

Some Common Weeds: Some of the most common weeds found in crop fields are

There are 3 methods of weeding

Manual Weeding: Weeds may be removed manually either by uprooting them or by cutting them with the help of tools like hand fork, khurpa and harrow.

Biological Method: Weeds can also be controlled by biological methods. For example, cochineal insects are used to control the growth of the weed called opuntia.

Pesticides: The chemical substances which kill pests without harming the crops are called pesticides. These chemicals are sprayed by using a sprayer. the following chemicals are used to kill these pests.

Insecticides: These are used to destroy insects. Examples : 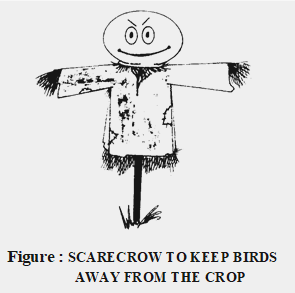 Once the crop has matured, it has to be gathered. The process of cutting and gathering a matured crop is known as harvesting.

All over the world harvest season is celebrated with excitement. Baisakhi, Holi, Pogal, Diwali, Nabanya and Bihu are some of the harvest festivals celebrated in India.

Harvesting of grain crops: Most of the grain crops are reaped close to the ground with the help of a sickle.

Threshing: The process of separating the grain from the harvested stalks of hay is known as threshing. This is done by spreading the harvested crop on the ground and walking over them. Animals such as bullocks, buffaloes or camels are also used on a large scale for this purpose.

Winnowing: The process of separating the grain from the chaff is known as winnowing. Farmers hold the mixture of grains and chaff at a height and allow them to fall in a gentle stream. The wind blows away the chaff which is lighter. The heavier grains fall directly on the ground below and are thus separated.

Big farms use huge machines called combines which cut, thresh as well as separate the grain from the chaff.

There are two types of food materials perishable and non-perishable.

There are two different modes of storage : dry storage and cold storage.

The keeping of animals for a specific purpose is called domestication. All domesticated and useful animals constitute livestock. The breeding, feeding, and carrying of livestock for food and other useful purpose is known as animal husbandry.

Which agriculture task has to be completed before sowing?

What do you mean by the term agricultural practices?

What do you understand by weed?

What do you mean by transplantation?

What are the differences between rabi and kharif crops?

Why are seeds treated before sowing?

What type of food materials are usually stored in cold storage?

What is animal husbandry?

Why do the farmers carry out leveling of the ploughed fields?

Why is the storage of food materials needed? Name the types of storage.

How to Get Best Grades